Roger Daltrey: “Get Your Hearing Checked!”

Roger Daltrey, lead singer and founder of the iconic rock group, The Who, says, “Dr. Ronna Fisher, at Hearing Health Center, is the only person I trust with my hearing.”

Near the end of Monday night’s performance of the rock opera, Tommy, at Ravinia Festival, Daltrey talked about the struggles with his hearing.  “Do yourself a favor, he told the standing ovation crowd, go get your hearing checked.  It’s more important than you know.”

“I advise you all — all you rock-and-roll fans — take your f—ing ear plugs to the gigs. If only we had known when we were young … we are lip-reading,” Daltrey told the audience. 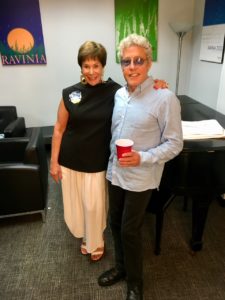 Daltrey was in Chicago eight years ago when he first met Dr. Ronna Fisher. At the time, he was only interested in being fit for in-ear performance monitors. When Dr. Fisher overheard him admonishing his band for playing so loud that he couldn’t hear himself sing, she knew that, most likely, it wasn’t the band’s problem. She convinced him to have his hearing tested, and as she suspected, the band was not to blame. Daltrey had a significant hearing loss, and Fisher fit him with his first set of hearing aids. He now visits Dr. Fisher every time he is in Chicago.

For the record, though, Daltrey is not the only member of The Who to battles difficulties with his hearing. Who co-founder Pete Townshend, has wrestled with hearing problems for decades and, according to Daltrey, now wears hearing aids in both of his ears.

Earlier this year, fellow Rock and Roll Hall of Fame inductee Eric Clapton disclosed he is also beset with major hearing issues. Other rock legends whose hearing has been afflicted include Neil Young, Stephen Stills, Ozzy Osbourne and AC/DC’s Brian Johnson, who was warned by doctors that he could lose all his hearing if he did not stop touring.

Johnson had constant tinnitus, a ringing, buzzing, hissing sound in the ears that no one else can hear except you. “I was in big, big trouble”, said Johnson. “I didn’t think I could handle it,” “To have something in your head, a constant noise, it’s probably the most horrendous thing a musician, could have, not to mention anyone else. I will try and help anyone who asks. Right now, I hear it screaming away in my head.”

Most often, in fact 95% of the time, when there is tinnitus, there is hearing loss. Noises in your head/ear is often the first sign/symptom that something is wrong with the auditory system. At first, it comes and goes. This is a warning. Protect your ears, your hearing, and your brain. If you ignore it, and continue exposing your ears/auditory system/brain to excessive sound, the tinnitus becomes permanent.

How can you protect yourself? Take a break every once in a while.  Take off your headphones and give your ears a chance to rest and normalize. Turn down the volume when you start listening again.

Get custom ear pieces. Headphones and earbuds let sound leak out so you turn the sound up louder. Customized ear pieces, that can be made to fit whatever device you’re using, sits deeper into your ear canal and closer to your eardrum. Sound doesn’t leak out and the volume is reduced.

Invest in quality headphones and earphones. You’ll be less likely to crank up the volume to dangerous levels if the sound is balanced. There’s also less chance of damaging high frequencies if the headphones aren’t distorting the high-end. Think of how uncomfortable it is to listen to really horrible headphones — that discomfort might be the early stages of damage. (1)

As for Roger Daltrey, he told his audience that he plans to continue performing “for a long time; I am lucky to be doing what I do, so thank you.”

The Ear is the Window to the Heart