Link Between Hearing Loss and Alzheimer’s 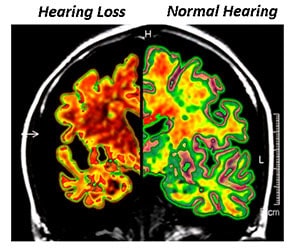 Hearing well not only effects your everyday life, it can effect your long-term brain health! Many studies have shown a significant link between hearing loss and dementia, which leads into Alzheimer’s. These long term studies suggest four ways this link is seen to affect patients.

1. Processing auditory information from the inner ear, like speech, uses a significant portion of the brain. Sound travels through your ear to nerves that send signals to the primary auditory cortex of the brain, which is in the temporal lobe. The sounds are then put together and processed in an area called the Wernicke’s area, which is in the parietal lobe.(8) The Wernicke’s area is in charge of putting the auditory information you received from your ears into speech understanding.(7) But, if the brain cannot hear that information due to hearing loss, then brain activity lessens. This causes a reduction in gray matter of the brain over time, in other words, your brain shrinks! The areas of the brain that are primary for speech understanding, such as the Wernicke’s area, are very close to where Alzheimer’s disease is first seen on brain scans. Patients with dementia and Alzheimer’s can receive appropriate hearing testing and treatment of hearing loss, in turn, reducing their cognitive decline. Therefore, it is imperative that those being diagnosed with dementia have hearing testing to determine if hearing loss is a contributing factor to the patient’s dementia.(7)

2. The symptoms of dementia and Alzheimers can mimick hearing loss. (9) Answering questions wrong, not remembering what was said, depression, and anxiety can all be attributed to dementia as well as hearing loss! Misunderstanding of words or lack of participation in conversations can be a sign of hearing loss or dementia. A simple hearing test can determine which it is!

3. Social isolation is a well known risk factor for dementia and Alzheimer’s, as well as depression.(7,8,9) When someone is hard of hearing, they are less likely to engage in social activities and conversations because it takes a lot of effort in these situations to overcome the hearing loss and participate normally. Simply conversing with one person exercises the brain and reduces negative feelings such as depression. The National Council of Aging published a study surveying 2,300 hearing impaired adults and their family and friends. It found that untreated hearing loss was linked to depression, anxiety and social isolation. Those who corrected their hearing in this study found significant improvements in every dimension of their lives!

Therefore, it is critical for patients exhibiting any signs or symptoms of dementia or Alzheimer’s to get an audiological examination to rule out hearing loss. Call us to schedule your complimentary hearing screening today!

WHEN TREATED WITH HEARING AIDS

How can I care for my hearing aids in the summer? Hearing Health Center Audiologist: Dr. Ning Jing

Untreated Hearing Loss Can Be Devastating