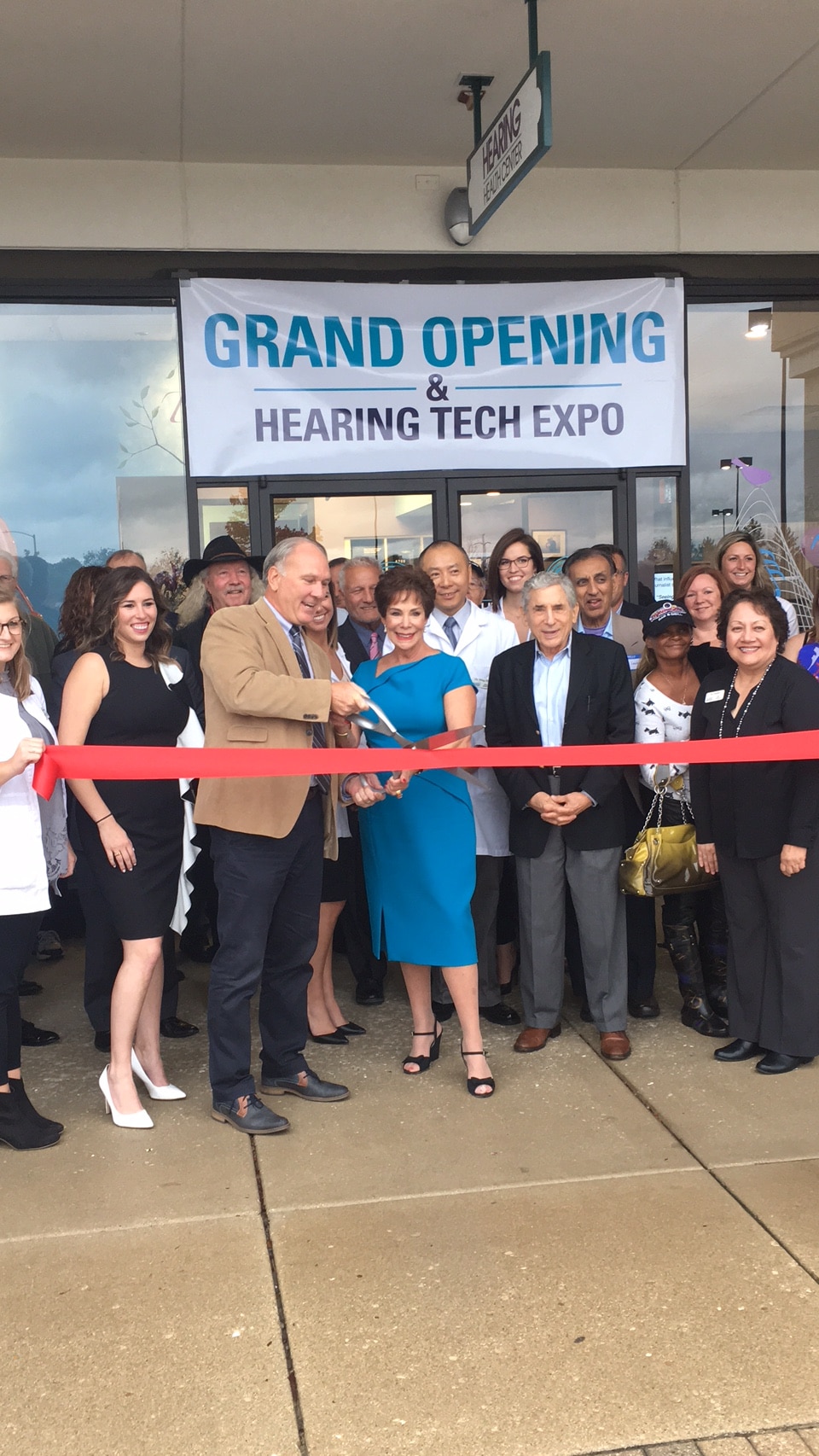 Naperville Mayor Steve Chirico helped christen the new offices for Hearing Health Center in the Fox Run Square shopping center on October 24, but not before receiving a clean bill of hearing.

Just prior to his thanking Hearing Health Center’s founder, Dr. Ronna Fisher, for 33 years of support in the Naperville community, Chirico had his own hearing checked by Dr. Ning Jing, a longtime Naperville resident celebrating his 15th year with the practice.

A special guest at the evening’s ribbon cutting ceremony, open house and hearing tech expo, Chirico admitted he hadn’t had a hearing checkup since grade school. “I’m surprised that doctors don’t test hearing,” he said. “They take our blood pressure, check our cholesterol, and run a myriad of other tests. Why don’t they check our hearing?

They will soon if Fisher has anything to say about it. As one of the nation’s foremost audiologists, Fisher has been advocating for incorporating hearing tests in yearly physicals for years.

“The problem is that most people don’t have any trouble communicating in a nice quiet room, three feet from their doctor, with no background noise,” Fisher Explains. “Patients don’t mention it and doctors don’t pick up on it or think to ask.”

New research links memory, early dementia and increased falls to hearing loss.  When the brain does not receive all of the sound stimulation it should, the ability to process and understand speech deteriorate, and it gets worse the longer treatment is delayed.  Early detection and using hearing aids, the only treatment for 95% of all hearing loss, is key.

“Hearing aids today are virtually invisible,” said Hearing Health Center patient Walter Jacobson, the legendary WBBM-TV news anchorman and reporter who attended the Naperville grand opening.  “I thought I heard fine until I missed an important part of a conversation.  When I got hearing aids, I was shocked.  I had no clue I was missing so much.  They changed my life.”

Fisher is also the founder of The Fisher Foundation for Hearing Health Care, a nonprofit that provides hearing aids to her patients, and anyone unable to pay for treatment. Today the focus of the foundation is helping children with brain cancer that have permanent hearing loss from the treatment that saved their lives.

“These families are financially drained,” explained Fisher. “Their child is frustrated, angry and starting to lag behind.  If they don’t get hearing aids immediately they will be behind the rest of their lives.  They have no support and nowhere to turn.  Thankfully, our foundation is there to help.

Hearing loss occurs slowly and may not be a problem all the time.  Difficulty understanding words and parts of conversations in noisy environments or from a distance are the first indication of hearing loss, which now affects Americans as early as in their 40’s.  That is the time to get it checked.

“People wait far too long to see a professional licensed audiologist,” added Fisher. “The longer your brain gets mixed up information, then your ability to process speech deteriorates. I can help you hear; I cannot fix your brain.”

Fortunately, the evening included some positive news for Naperville’s Mayor Chirico. “Good news for the City of Naperville,” Fisher announced to the crowd just before the ribbon cutting.  “Mayor Chirico’s hearing is great and his brain processing is spot on!  Dementia is nowhere in sight so he can be mayor for a long time.”

Visit our Facebook page for more photos from our fantastic celebration!

Tribune Magazine Story Published on Hearing Health Center What is the best way to clean my hearing aids?

The Ear is the Window to the Heart